Liquid droplet impacts onto solid surfaces have attracted enormous amount of attention from wide range of research fields including experimental and numerical investigations. Unlike experimental efforts, numerical and analytical studies generated various sets of data. In this study, we investigated the spreading velocities inside the water droplets impinging onto a dry glass substrate using time-resolved PIV. The method, together with the high spatiotemporal resolution and the additional treatments improving the robustness, allowed us to resolve the radial velocity profiles efficiently in the spreading phase. Several impact velocity cases ranging from 0.40 to 0.96 m/s were studied. They correspond to low and moderate level Weber numbers (4.9?27.6). We observed that instantaneous radial velocity distributions exhibit linear and nonlinear modes. The nonlinearity is caused by the vortical flows formed at outer regions of the spreading liquid lamella. We demonstrated that even at low impact velocities the linear parts of the profiles obey a quasi-one-dimensional theory proposed in the literature. The comparison of obtained results with a literature-based numerical study, performed for high range of Weber numbers, confirmed the simultaneous existence of linear and nonlinear parts in the radial velocity profiles. In spite of the scale differences in terms of Weber number, the agreements in the tendencies of the profiles imply the validity of the mechanism considered in the numerical study even at low and moderate level range of Weber numbers.

Shadowgraphy images of a droplet impinging and velocity vector maps

Enhancing the Critical Heat Flux (CHF) is extremely needed in some engineering applications. Many methods involving nanofluids and surface modifications have been investigated to enhance the CHF. Most of the previous works focus on pool boiling and upward-facing surface conditions. An experimental research on enhancing the CHF in downward-facing saturated flow-boiling conditions was performed by attaching a metal porous honeycomb plate. The experiments were conducted under four different flow rates: 160, 320, 640, and 1280 kg/(m2 s). It was found that the porous honeycomb plate can both enhance the CHF and reduce surface superheat at all four flow rates. However, the CHF increase ratio decreased as the flow rate increased, i.e., from 2.4 at 160 kg/(m2 s) to 1.1 at 1280 kg/(m2 s). The enhancement effect is attributed to the honeycomb structure and water supply through the porous media of the honeycomb. The role of the water supply through the metal porous media was investigated. 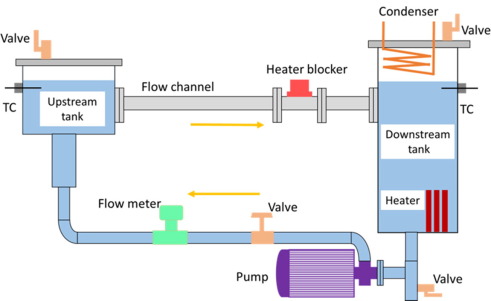 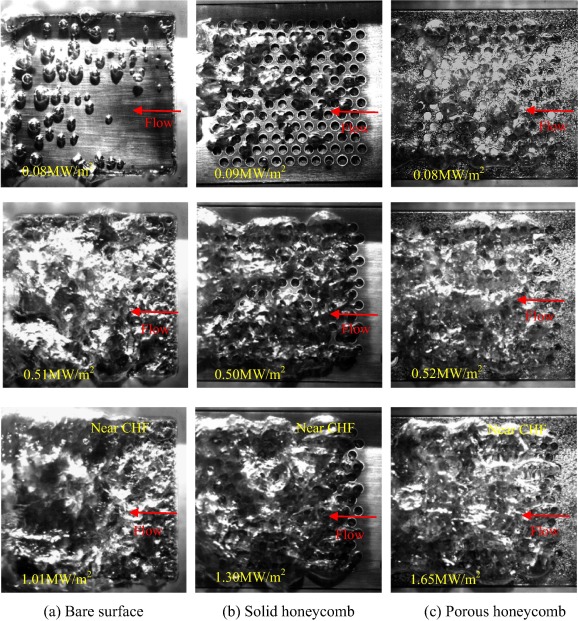 Ex-vessel cooling is an important concept for ensuring safety in a nuclear power plant. Many researchers have focused on critical heat flux (CHF) enhancement using reactor pressure vessels. Previous studies mainly focused on other types of enhancement methods, and few investigated the use of radiation to improve boiling heat transfer. In this study, gamma-ray radiation and electron-beam radiation are used to increase the boiling heat transfer for CHF. Initially, droplet tests are performed to check the hydrophilicity after irradiation. The results show that the contact angle decreases sharply in the irradiated materials. Then, pool boiling experiments are performed using bare and honeycomb surfaces. Gamma-ray irradiation and electron-beam irradiation of the bare surfaces cause CHF enhancements of ?60% and 50%, respectively. However, no improvement is observed for the honeycomb surface after irradiation. The coolant amount supplied by the honeycomb to the boiling surface is believed to affect the CHF. After irradiation, the coolant amount supplied to the boiling surface does not increase. Thus, the coolant supply reaches a limit, and no further CHF enhancement is observed from the irradiated honeycomb surface. It is also observed that the irradiation source had no effect on CHF enhancement. 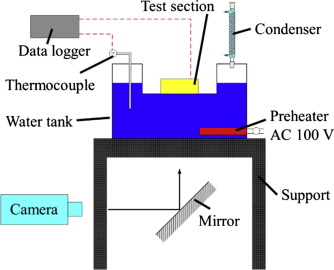 Since the 1980s, numerous experiments have been performed to explore the mechanisms of molten core?concrete interaction (MCCI) phenomena. However, previous experimental results show uncertainties pertaining to several aspects such as the dependence of concrete type on the ablation profile (isotropic for limestone-rich concrete and anisotropic for siliceous concrete). To explore the mechanism governing these aspects as well as to predict MCCI behavior in real severe accident events, a number of simulation codes have been developed for process calculation. However, uncertainties exist in the codes because of the use of different empirical models. In this study, a two-dimensional computational code was developed using multi-physics models to simulate MCCI phenomena based on the moving particle semi-implicit (MPS) method. In contrast to previous studies, gas generation was simulated by calculating the force balance of the bubbles in the liquid pool in order to investigate its influence on the ablation behavior. Moreover, chemical reaction was modeled by calculating the heat release from the redox reaction between the corium and melted concrete during the erosion process. CCI-2 and CCI-3 tests were simulated by applying this code to study the aspects that may affect the ablation profile with different concrete types. The simulation result generally matches the experimental results on both axial and radial ablation rates. Application of the gas release and chemical reaction model suggested that one possible reason for the anisotropic ablation profile observed in the siliceous concrete tests is the heat transfer enhancement near the sidewall from the gas release and chemical reaction. In contrast, the test using limestone-rich concrete generated an isotropic ablation profile because axial ablation was also enhanced by the large gas discharge from the bottom concrete. In addition to the ablation profile, the crust formation and concrete?corium interface profile at the bottom in the CCI-3 test were reproduced with the help of the proposed models.

Final shape of the experimental and simulation results.

It is important to clarify the molten material jet breakup process to estimate corium behavior in the lower plenum of a boiling water reactor (BWR). To identify the effect of control rod guide tubes (CRGTs) on the jet breakup behavior, a molten material (U-alloy) breakup experiment considering CRGTs in a BWR lower plenum was conducted under isothermal conditions. The experiment results show that jet breakup fraction for the case with CRGTs (pitch/diameter ratio of 1.37) was only approximately 20 % of that for the case without CRGTs. A coarser pitch/diameter ratio of 2.47 was also tested, but this configuration only slightly reduced the amount of jet breakup. The experiments also indicate that the CRGTs had no significant effect on the fragmentation of droplet diameter. Furthermore, the velocity distribution was measured around the jet with particle image velocimetry. The velocities of the water surrounding the jet for the cases with CRGTs were relatively larger than those in the case without CRGTs. 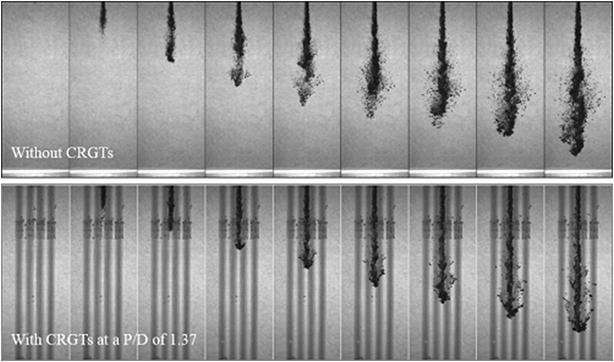 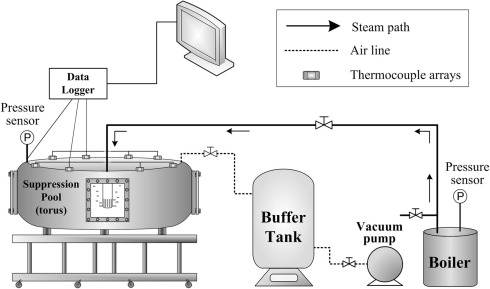 Schematic of the experimental setup. This study aims to investigate material behaviors in high temperature and high pressure conditions such as in a nuclear power plant severe accident. Buckling load is experimentally measured for metallic slender columns. The buckling tests are performed in a wide range of temperature from room temperature up to 1200 oC, and the measured buckling load is compared to the numerical predictions. Furthermore, the effect of the creep on the buckling is also investigated for a stainless steel (SUS304) in high temperature conditions. We measure lateral deflections of the column, and plot the time-deflection curve. According to the measured time to creep buckling, the relation between stress and creep buckling time will be established and it will be useful to understand mechanical behaviors of metal under high temperature. Finally, we will perform experimental and numerical studies into ruptures of tube columns by external pressure which is related to the analysis of the accident in Fukushima nuclear power plant. All of the experiments are visualized by s high speed camera. 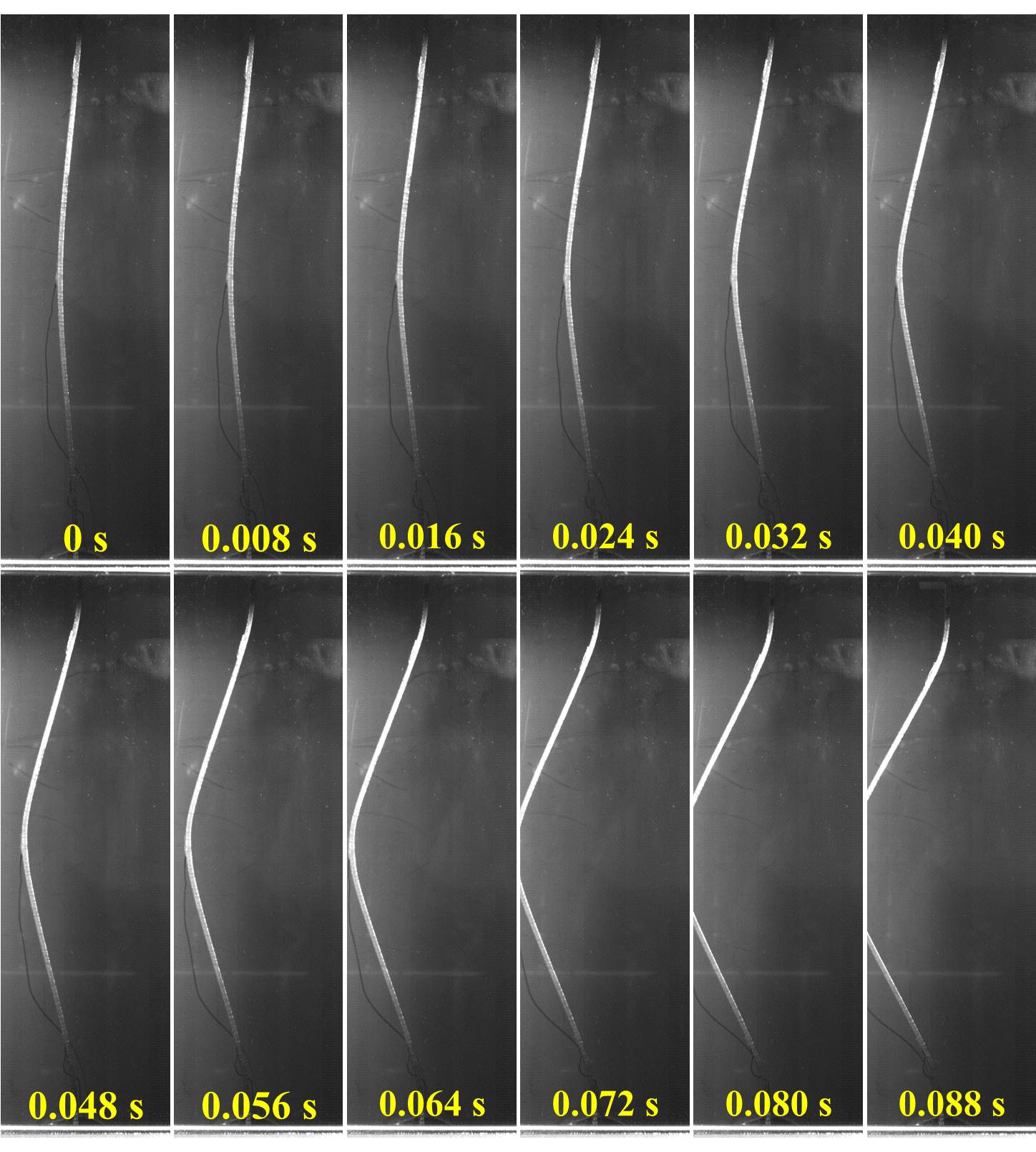 Fukushima daiichi unit 2 the SBO severe accident provoked by the Tsunami. There are several uncertainties around the RCIC turbine performance along the accident due to the loss of AC/DC powers. Despite the RCIC turbine worked for almost 60 hours there is no detailed information about it. Another objective is to determine if the SC was flooded by the Tsunami, situation that could be possible according to the subsequent data. To study those facts I’m going to simulate the RCIC turbine-SC-RCIC driven pump system. Once the system works correctly I will insert it to the, already created, Laguna Verde NPP representation and make the accident progression analysis by using RELAP v3.5.